INTRODUCTION TO THE MONTANA CLIMATE ASSESSMENT

The Constitution of the State of Montana, ratified in 1972, affirms Montanans’ inalienable “right to a clean and healthful environment” (State of Montana 1972). Since the signing of the constitution, that declaration has galvanized Montanans to protect the state’s air and water, and to work toward keeping the state free from toxic pollutants. Today, that declaration also means living safely, successfully, and with foresight in a world undergoing climate change.

The right to a clean and healthful environment, including issues around climate change, requires that Montanans have access to the best and most relevant scientific information, updated at regular intervals, and consider new discoveries as they become available. The information behind the Montana Climate Assessment reflects decades of peer-reviewed research from Montana’s universities and agencies, new analyses by chapter authors, as well as the insights and observations of resource managers, farmers, tribal community members, and other citizens from across the state. It also builds on research undertaken across the country and around the world. At the end of the day, it is important to understand what climate change means for Montanans now, and how current information will help us make wise decisions for future generations.

Montana’s landscapes are vast and diverse. They range from the alpine and forested ecosystems of the Northern Rockies to the parklands and grasslands of central and eastern Montana. Our snow-capped peaks and glaciers are headwaters to three of the major river systems in North America: the Missouri, Snake/Columbia, and Saskatchewan. Montana’s climate is as diverse as any state in the nation, shaped by the interaction of air masses from the Pacific, the Arctic, and the Gulf of Mexico, and by storm systems as they move across the state. As a result of this complex interaction of weather and topography, the climate and day-to-day weather are highly variable across the state, from western Montana to the Rocky Mountain Front, the Yellowstone River basin, and the High Plains.

Despite its variability, Montana’s climate is critical to our economy, which is in large part based on natural and managed resources. Climate influences the state’s water supply and the economies that water supports (and, as Montana is a headwaters state, the economies of much of the nation). Montana includes over 23 million acres (9.3 million hectares) of forested land that is both publicly and privately owned, and is also a major agricultural state with billions of dollars in commodity sales annually. Further, in places where tourism and recreation are economically important, climate influences Montana’s snowpack, pristine streams, native forests, and iconic wildlife, which are important for sustained prosperity. In still other parts of Montana, climate variations and weather events directly affect livelihoods in isolated rural communities with limited access to services. Stated simply, the prosperity of Montanans is strongly dependent on the current climate and its stability.

Climate conditions are inherently dynamic, changing at home and around the world. Human-caused climate change has the potential to change these dynamics in unpredictable ways, and no part of the planet will be untouched by these changes. At a global scale, the international scientific community has indicated that average annual temperature will at least be 2.5°F (1.4°C) and likely 3.6°F (2.0 °C) higher in the next century than it was between 1850-1950, with ensuing consequences for both human health and livelihoods (IPCC 2013). Current trends and projected climate changes in Montana are consistent with global patterns (Figure 1-1). The state’s temperature has increased 2-3°F (1.1-1.7°C) in the last 65 yr (1950-2015), and climate models project as much as a 9.8°F (5.4°C) warming across the state by the end of the century. 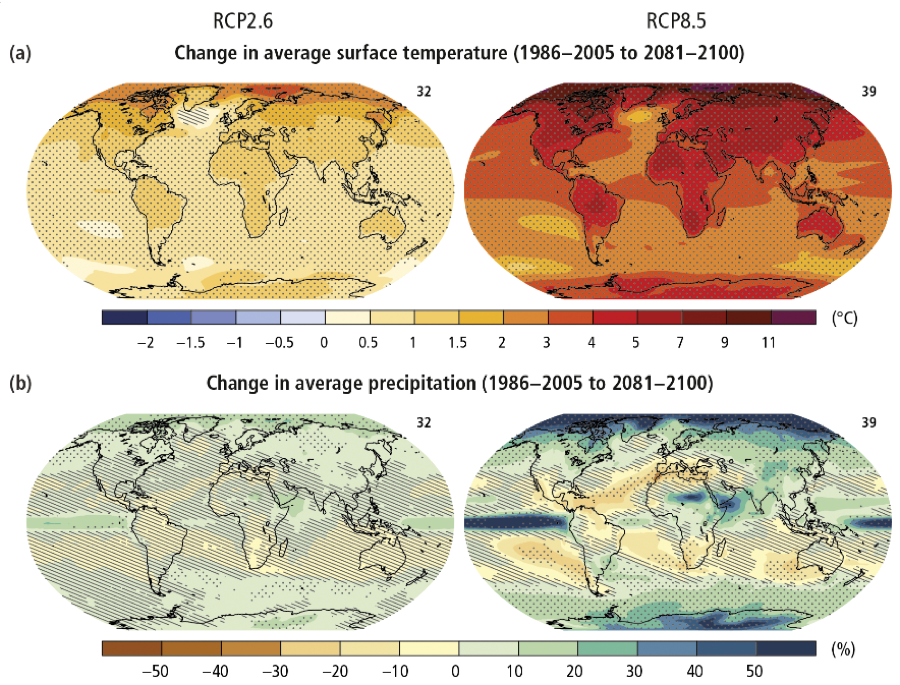 Figure 1-1. Global climate projections from the Intergovernmental Panel on Climate Change, showing temperature and precipitation trends for two different future scenarios, as described in the Climate chapter of this assessment (IPCC 2014a).

With such changes on the horizon, timely information is clearly needed. Scientific assessments are essential tools for linking knowledge to decision-making, by surveying and synthesizing peer-reviewed scientific information across disciplines, sectors, and regions. Assessments highlight key information that can improve understanding of complex issues and identify significant knowledge gaps where more information is needed. An assessment of Montana’s changing climate and its resultant effects helps bring scientifically based information to the people of our state in an organized and understandable manner.

The 2017 Montana Climate Assessment (MCA) is the second effort to present the science of climate change at a level that is useful for our state.4 The Montana Institute on Ecosystems, a statewide center based at both Montana State University and University of Montana, has taken on the responsibility of organizing the MCA. The MCA is the result of two years of effort by university faculty and students, state and federal agency researchers, non-profit organizations, resource managers, and citizens from across Montana. Through questionnaires and listening sessions, Montana stakeholders helped identify what climate changes are of greatest concern to Montanans, what types of climate-change information are most needed, and what mechanisms are most helpful in delivering information. Leading climate scientists at the regional and national level provided independent review of the findings of this assessment to ensure its credibility. Public comment was also solicited and considered. The audience for this assessment includes natural and cultural resource managers, policy makers, state and federal government agencies, and local businesses and communities, as well as the public at large.

This assessment is intended to be the first of a sustained effort, one that will be updated and expanded on a regular basis. In this way, the MCA contributes to the flow of information from the national level to the regional, state, and local levels. It is intended to help decision makers weigh different strategies for responding to climate change effects and incorporate new knowledge as it becomes available. The MCA also attempts to engender information flow in the opposite direction—by encouraging decision makers to identify critical information gaps that require new scientific investigation, tool development, and future assessment.

Each chapter presents a set of key messages that are used to organize the information and familiarize the reader with the most important findings of the assessment. For each key message, we provide a statement of confidence in our findings. We categorically rated the certainty of key messages on the basis of evidence and agreement, following the approach used by the Intergovernmental Panel on Climate Change’s (IPCC’s) Fifth Assessment Report (see sidebar) (IPCC 2014b). For each key message, the authors of the relevant chapter rated evidence as “limited,” “medium,” or “robust” depending on the type, amount, and quality of the scientific evidence supporting the message. Authors also rated the agreement—the consistency of the evidence among scientific reports—as “low,” “medium,” or “high.” The authors offer their expert judgement in these relative assessments of evidence and agreement, and provide details in the text to support their ratings. The greater the evidence and agreement, the higher the level of confidence the authors have in the certainty of the key message.

From these key messages and supporting assessment content, it is clear that climate is changing and there are measureable effects on production systems and ecosystems in Montana. There is strong evidence that both temperatures and precipitation will increase in the future. These climate changes have measurable effects, like reductions in ground and surface water resources due to changing timing of precipitation and snowmelt, and measurable impacts like declining forest health and more wildfires, to altered crop seasons and greater irrigation demand.

An increased awareness and understanding of changing patterns, effects, and impacts in Montana, now and into the future, will help our state plan, make decisions, and take actions to promote the good health and prosperity of the people and landscapes of Montana. The MCA provides additional understanding of these changes within the state of Montana and suggests some guidance for strategies and options to respond to their impacts. We hope that this first Montana Climate Assessment motivates much-needed discussion that considers multiple sources of knowledge, and that it leads to science-informed planning efforts and action in the areas of water, forests, and agriculture, as well as sets a pathway for future climate-change research relevant to Montana.